I am proud to announce that OpenShot 1.4.1 has been released! This was originally going to be a quick and simple bug fix release, but instead, has grown into a more full-featured release. This has been a very busy month for OpenShot, with a trip to SCALE 10x, a couple presentations, and now ...

I am officially back from SCALE 10x (Southern California Linux Expo), and I have a few photos and experiences to share with everyone. We (myself and a few co-workers) arrived on Thursday (Jan 19th) at the Hilton LAX in Los Angeles. We spent most of Friday in PostgreSQL training (unrelated to OpenShot, but really awesome ...

In my presentation at SCALE 10x (on January 21st, 2012), I created and then debuted a fun, short Minecraft video. The video tells the story of Steve, a resident of Minecraft, who wakes up to find monsters invading his land. Steve looks for safety in an abandoned cave, and unknowingly stumbles into the real world ... 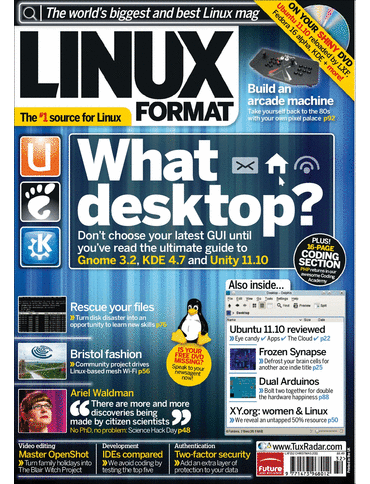 In the December 2011 issue of Linux Format magazine, I just discovered a great article about OpenShot. The 4 page spread was written by Jono Bacon, and also included a small mention on the cover. In addition, OpenShot 1.4.0 was included on the DVD, which comes with the magazine.

Happy New Year! 2012 is going to be a big year for OpenShot. We are about to release version 1.4.1 (details below), and are packing our bags to attend SCALE 10x (Southern California Linux Expo). I spent a large amount of my time last year working on a new video editing framework, which ...